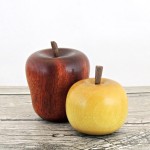 Did you know that rocking in a rocking chair can actually help improve your memory? Your Family Rocking Chair can help you remember all the stories and history that your family and it’s rocking chair has experienced!

The rocking chair was part of colonial life; it was an American phenomenon. Although it came to the colonies by way of England as a garden chair, new Americans quickly moved it into their homes as a cradling device for mother and child. The rocking chair grew so popular among the colonists that by 1750 the American Windsor Rocking Chair,built in Philadelphia, became known worldwide.

Later, in the 1900’s Rocking Chair Therapy was emerging as a treatment for various ailments, and at the time considered progressive and effective. Doctors have encouraged, suggested and even prescribed rocking for a long time. Rocking regularly in a good rocker simply has the ability to calm the spirit, soothe a stressed body, focus the mind and all the while gently exercising even the weakest of muscles.

Today we’re discovering how important the rocking chair is for psychosocial well-being; its use has spread far beyond the mother/child cradle, and can be a cure for a wide range of health problems. Click here for more…

After a 6-week study on the use of daily rocking chair stimulation for dementia patients, improvements in participant’s depression and anxiety and use of pain medication were found to be directly related to the rocking. For those who continued rocking after the end of the study a significant improvement in balance was also found. Click here for more…

Research from the Columbia Hospital in Milwaukee, Wisconsin resulted in an article in the “American Journal of Sports Medicine”, March-April 1989 titled “Seniors ROCKING TO GOOD HEALTH” detailing the benefits of rocking to older Americans. It is good for the mind, body and spirit and even can help those with an otherwise sedentary lifestyle to achieve muscle tone through the manageable, non-weight bearing exercise of rocking in a rocking chair.

Studies at the University of Rochester, Rochester, New York used Rocking Chair Therapy with Alzheimer and Dementia patients. Their research showed that seniors could literally rock away their anxiety and depression. The patients required less medication and their balance improved as well. Further benefits included a happier nursing home staff. Families of rocking seniors were happier because their loved ones were happier. Isn’t it interesting that this research showed that one intervention (rocking) produced six benefits, and effected many people in a positive way?     Click here for more…

In another study measuring auditory and visual alertness in children with multiple disabilities, results indicate a relationship between vestibular stimulation and alertness. Findings indicate children’s performance was significantly better after just 3 minutes of rocking.

Rocking as a beneficial, natural and universal phenomenon is also evident from cross cultural analysis. According to a study of “strong” toddlers across cultures, the use of swings, hammocks and rocking chairs are a common denominator towards the Rocking 6 development of psycho-social well being and resiliency in children. Observations suggest that the these activities are mutually satisfying and soothing for both children and caregivers and that soothing movements are functional aspects incorporated into the daily lives of the healthy toddlers studied.

The benefit of rocking chair can be seen in Autism. The ARI (Autism Research Institute), always evaluating all forms of therapy, in recent years has seen an increase in interest of SIT for autistic adults and children. In treatment evaluation questionnaires that were administered, parents give sensory integration a very high percentage of 69% approval, with the highest of 47 therapies being Behavior Modification at 83%. Impressive.

Lorna Jean King (OTR, FAOTA) is one of the pioneers of Sensory Integration Therapy, lectures internationally, and is the Founder and Director of the Center for Neurodevelopmental Studies, Inc. in Phoenix, Arizona. When interviewed by the ARI she was asked about the importance of providing security and setting a calm tone in the home environment, especially after a busy day of schooling or therapy. She responded by saying “It may be as simple as having a rocking chair in their room”.  Click here for more…

It is the benefit of the rocking chair that the rocking motion soothes the brain and facilitates concentration along with the ability to think logically, which provides overall better cognitive processing. Rocking helps students who are experiencing a brain state of high arousal (hypervigilance) to be able to transition to a much more calm brain state to enhance his/her ability to learn and problem-solve.

Some schools are employing the use of student rocking chairs. The rockers can be placed behind a typical student desk. The chairs permit students to rock back and forth slightly while they are in class as they listen, study, or take a test. The sensation of rocking behind the desk is really less distracting to the rest of the class than other forms of improvised rocking. When students realize that the rocking is helpful to them, they seek it our as a way to self-regulate their brain state and enhance their ability to learn.

Keep on a Rockin’ for good health! Keep track of how you feel when you are in Your Family Rocking Chair and perform your own research! 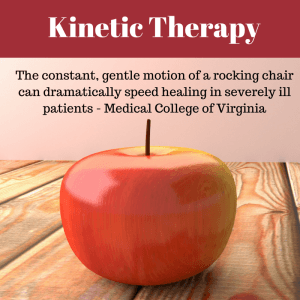 All orders are custom and we look forward to creating your chair! 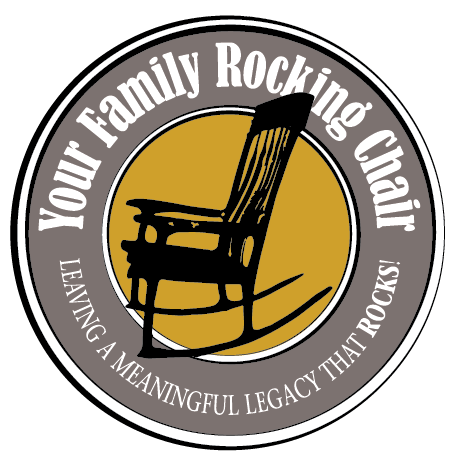